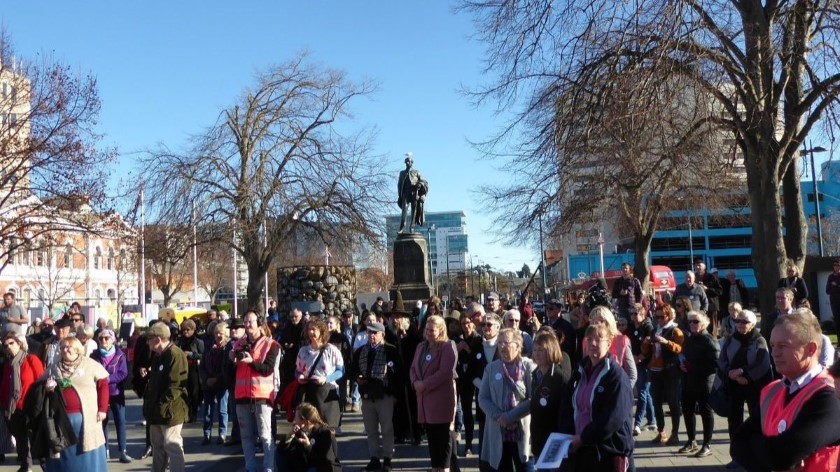 Video of the day can be seen here.

Bringing back the sound of bells to Cathedral Square

Recordings of the Cathedral bells rang out via loud speakers to those gathered in the Square just after 12.30pm. The sound of the bells will be played every Friday lunchtime, weather permitting.

“This year our focus is behind the scenes getting the planning right before stabilisation begins in early 2020. In the meantime, we want to remind people that there is a project underway to reinstate this iconic Cathedral in the central city, and the sound of bells is a positive reminder,” says Keith Paterson, Project Director.

Dean Lawrence Kimberley sees this as a simple way to bring back a much loved Cathedral tradition while the real bells await their return to the reinstated Cathedral.

Cathedral bellringer, Chris Oldham, who’s been ringing the bells since 1985 and been Cathedral Administrator for about 28 years, says he’s delighted the bells will be heard in The Square after such a long absence.

“Pre-earthquake we’d ring the bells for Sunday church services and for all sorts of occasions, like midnight New Year’s Eve, civic welcomes for the Americas Cup and Rugby World Cup, and ANZAC Day. In fact, it’s not the first time we’ve used speakers.  On New Year’s Eve we often had to amplify the bells using speakers so they could be heard over the sound of the crowd gathered in The Square.”

The original Cathedral bells were cast in 1881. In 1978 the bells were replaced and then later damaged in the 2011 earthquakes. They went back to England, where one bell was re-cast and the rest re-furbished. They’re safely tucked away for now.
Chris and his fellow bellringers still practice their craft weekly at St Paul’s Church in Papanui.
“We’re keeping our hands in!” says Chris.