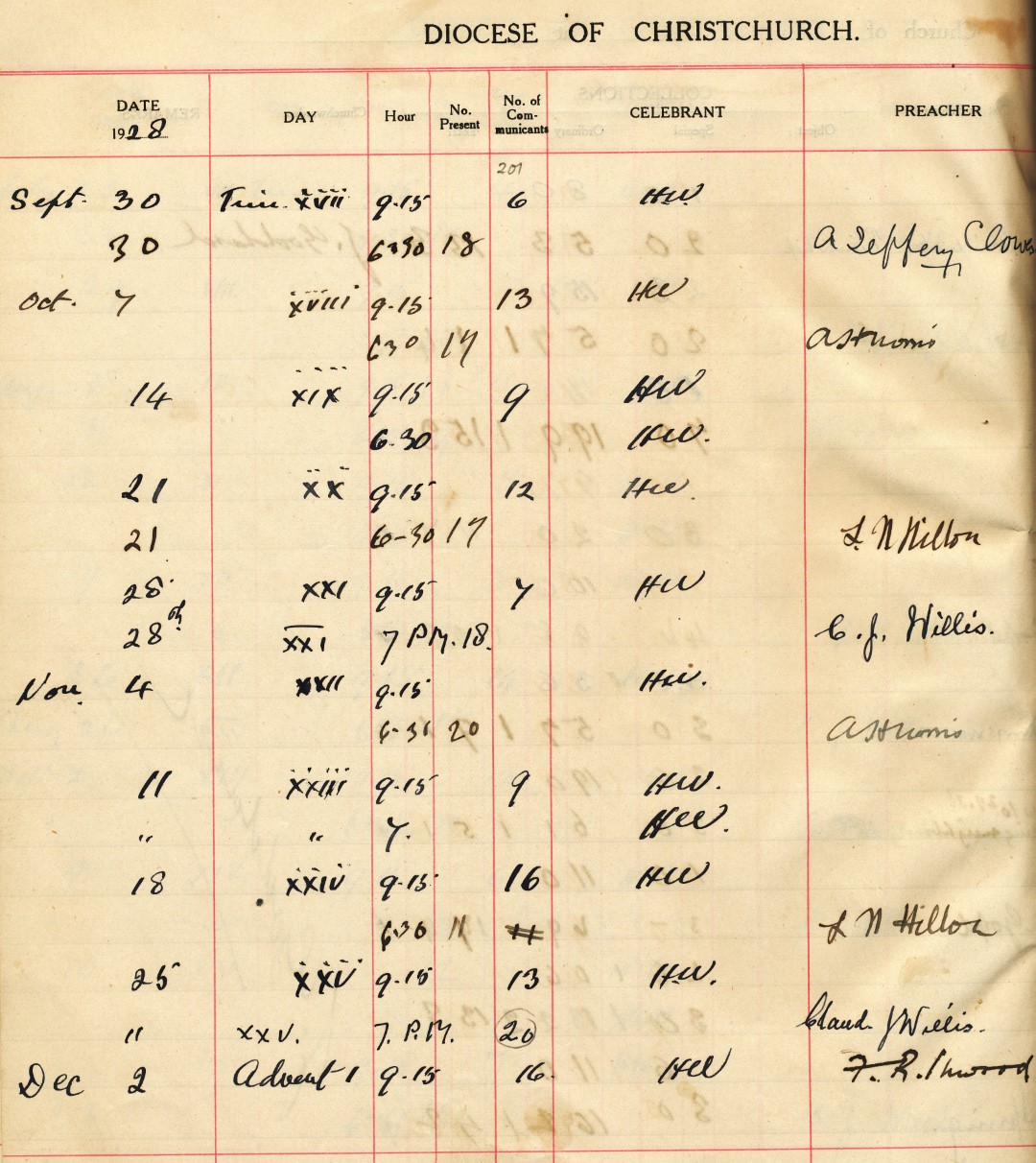 Life is full for surprises and the information about this one arrived by email.  A Presbyterian colleague of Rev’d Canon Ben Truman was sorting books for the Rotary Bookarama when he came across a volume labelled “Vestry Book.”  Intrigued, he investigated further and discovered that despite the lack of clues, its origin was in the Parish of Opawa.

That being confirmed, there was now the possibility of using the Vestry Book, more usually known as a Service Register, to search for additional information. The dates indicated that it was used from 1925- 1939 and sure enough the initials HW [Henry Williams, Vicar 1907-1930] are a regular occurrence. The signatures of Layreaders were also there. These  men  were at various times Diocesan and Parish Layreaders; A J Clowes, C J Willis, C H Bridge and A H Joseph, H J Williams, A Bryden Jones, L N Hilton  and D B McGregor. They regularly preached at the evening service.

It is also possible to suggest that the Williams family had their holidays in early January each year, judging by the names of locum clergy during that time.  Curiously, numbers attending services on Christmas Day are not entered, except for 1927 when an evening Carol Service is noted and 1939  when 18 attended.  Even more curious, Easter Day communicants are not entered, yet figures can be found in the Diocesan Year Books. The signatures of the Bishops are not there either, yet those same Diocesan Year Books indicate that there were Confirmations during this time.

The 9.15am service was clearly Holy Communion as the number of communicants is carefully entered, but Henry Williams did not enter the total congregation numbers, so it is not until 1930  that it is possible to see what proportion they were of the total. Evening services at 6.30pm have a somewhat similar fate, as the numbers attending are spasmodically entered until 1930. In mid 1932 the evening service was discontinued

The years 1930- 1932 contain a variety of Clergy signatures. Initially Harry Warwick Smith was appointed, following the death of Henry Williams, and after  he died George Leslie  Harold took the reins for a few months. Harold  Northcote followed and then once more the Vestry Book indicates stability.  George Norman Nelham Watson seems to have a greater affinity with such volumes as he regularly records that the Sunday Services included hymns and a sermon, but the evening service has disappeared. The Right Rev’d Isaac Richards, former Bishop of Dunedin   retired to Christchurch at this time, and during 1935 he was a regular celebrant.

Joseph Francis Feron’s signature first appears in December 1939, but after ten entries the information fades leaving only  the numbers in the congregation and the offertory regularly recorded by R R Furze.

So Vestry Books aka Service Registers are not just pages of figures and signatures.  By looking more closely we can tell much about a congregation and those who took the time to fill them in.